Does General Gowon look like somebody who moved to London with half of Nigeria’s Central Bank?

We, the undersigned call upon Hon. Member of Parliament representing Tonbridge and Malling of the United Kingdom, Ted Tugendhat to withdraw his recent statement at Westminster;

“Some people would remember when General Gowon left Nigeria with half of the central bank, or so it was said, and moved to London,”

Mr. Tugendhat, had spoken when E-petition 554150 was being considered at the British Parliament on Monday, November 23, 2020 over a petition seeking sanction against the Nigerian government for alleged human rights abuses during the #EndSARS protests.

We are not unmindful that the MP had added “so it was said” to his presumptuous claim. That notwithstanding, Mr. Tugendhat would have availed himself with some basic historical overview on the exact circumstances of how General Gowon ended up dining at the student cafeteria at Warwick University after his overthrow on July 29, 1975 while in Kampala attending a summit of the Organization of African Unity (OAU now African Union)
Even after 45 years, General Gowon’s statement thereafter remains instructive;

“From all indications a new government had been established in Nigeria. I wish to state that I, on my part, have also accepted the change and pledged my full loyalty to my nation, my country and the new government. Therefore, in the overall interest of the nation and our beloved country, I appeal to all concerned to cooperate fully with the new government and ensure the preservation of peace, unity and stability of our dear motherland.

As a Nigerian, I am prepared to serve my country in any capacity, which my country may consider appropriate. I am a professional soldier and I can do any duty that I am called upon to do.
May I take this opportunity to thank all the people of Nigeria and friends of Nigeria for the support and cooperation that you all gave me during my tenure of office and call upon all of you to give the new government of our nation the same support and cooperation in the interest of our beloved country.
Long live one united, happy and prosperous Nigeria. Long live the Organisation of African Unity.”

The attached images are of General Gowon after he had enrolled as a student at the University of Warwick, United Kingdom. Where eventually his Ph.D Thesis focused on The Economic Community of West African States: A study in Political and Economic integration. 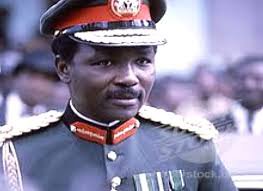 It would be recalled after his overthrow from government several investigations were made into corrupt enrichment. The General was neither found complicit nor indicted in any. More ever;

“Many offers of residence came to him in Kampala from various African countries. He notified the new regime in Lagos that he would leave Kampala for Lome in Togo. Since he was financially broke, teary-eyed members of the Nigerian delegation along with staffers at the Nigerian High Commission in Kampala donated 3000 pounds sterling to enable him begin a new life. He was flown to Lome – via Garoua in Cameroon – aboard President Idi Amin’s executive jet.

Part of the flight passed through Nigerian airspace and Gowon took the opportunity to transmit a radio message reaffirming loyalty to and support for Brigadier Muhammed’s new regime. Although offered permanent domicile in Togo he chose to join his family in the United Kingdom. He received an additional 10,000 pounds sterling donation from General Eyadema. Following a telephone call to Brigadier Muhammed, during which he made requests for elementary federal assistance, he left for London.”

Furthermore;
“When he got to London, he was offered official accommodation by the Nigerian government which he, however, turned down for a variety of reasons. After some weeks at the Portman Hotel, he moved into the house of an old friend – Mr. Emmanuel Otti – at 472 Finchley Road, London. The delay was to enable the house to be redecorated by Mr. and Mrs. Otti and Brigadier Sam Ogbemudia (who had been in the UK when the coup took place in Nigeria). Other friends came to the assistance of the family. It was not until September 1975 that he began to get his pension and gratuities as a retired Four-Star General. In the nine years he had been Nigeria’s ruler he had not built himself a single house, inside or outside the country, nor did he expropriate one kobo of government money.

Unlike some of those who served under him, his TOTAL savings throughout his service years as well as his years as Nigeria’s leader was N75,000 – all of which was inside Nigeria. In time to come this would stand in stark contrast to the conduct of and personal fortunes of most of those who conspired to remove him from office – or benefited from it. 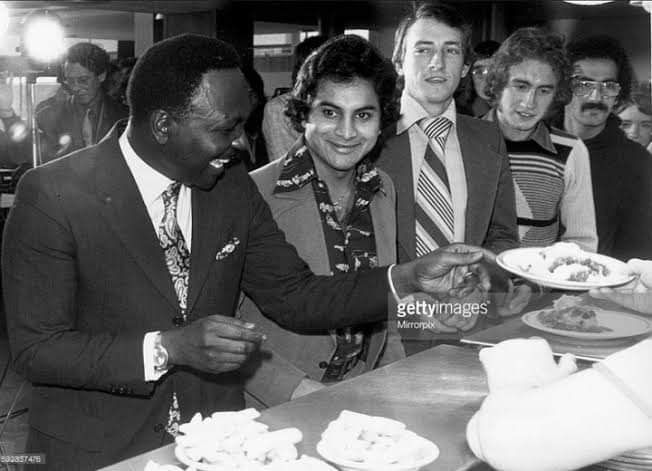 Once settled in with his family, the General, who was offered several Masters Degree programs, signed up for undergraduate studies in Political Science at Warwick University. Newspapers in Nigeria later carried news items and photographs depicting the former Nigerian leader carrying trays in a student cafeteria in the UK.
The Muhammed regime was embarrassed and therefore dispatched Brigadier TY Danjuma (who, took Kano born Col. Wali along) to ask Gowon adopt a supposedly more dignified stance. Gowon rejected the overture and reassured his “embarrassed sympathizers” that he was comfortable with his situation. (Conceivably nothing could have been more embarrassing than to be overthrown while attending an OAU summit). He made friends among the Nigerian students at Warwick, including a family friend of mine, Desmond Guobadia, now a legal practitioner in Lagos. Meanwhile his spouse, the former First Lady, Mrs. Victoria Gowon (who was a nurse) registered as a catering student at a University College in London.”
See details in; Military Rebellion of July 29, 1975 – Epilogue: From Kampala to Lome to London and back to Nigeria by Nowa Omoigui

Therefore, we the undersigned call upon all Nigerians of goodwill and indeed the members of the international community at large to ignore the insinuations of Mr. Tugendhat. In turn, by this signed clarification we call upon the MP to be appropriately corrected and to do the needful by withdrawing his statement on General Gowon.